2. in 2013, Hangzhou Olympic Sports Center orders 55 tons steel-joining nodes from CHAENG. Design period of Hangzhou Olympic Sports Center is 100 years, belonging to the premium and large sports construction project. Awning with steel structure is lotus petal shape. There are many bars converging on the node between petals, the structure and force condition of which is complex. 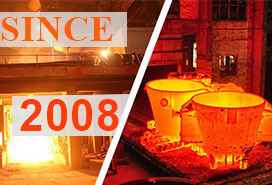